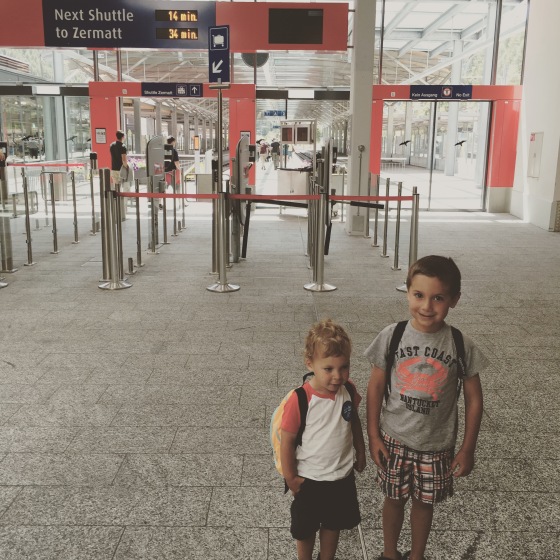 We have been wanting to go to Zermatt since we first moved here, but every time I looked last summer the weather wasn’t great.  We decided to finally bite the bullet (come rain or shine…or something in between 😉 ) and spend the weekend of Swiss National Day in the most iconic of Swiss places.

Since the trains here can be crazy expensive, we drove to Tasch and parked our car there, then took the 12 minute shuttle ride up to Zermatt.  We arrived at our hotel, the Romantik Hotel Julen, and got our first glimpse of the Matterhorn from our corner balcony.  Magnificent.

There is definitely some magnetic draw to this majestic mountain…maybe it’s because it’s this one lone peak towering above all the others, or it’s pyramid shape, who knows but we couldn’t get enough of it!

After getting checked in and settled at our super cute hotel (very cozy chalet vibe), we headed out for a late lunch in the village.  We ate at the Brown Cow Pub, which definitely had a fun atmosphere and was a laid back place for a casual lunch.  After lunch we wanted to go up one of the cable cars for an easy hike, but unfortunately it started to rain.  The showers were passing though so we just explored the village a bit instead.  At one point we were walking down the street only to see a herd of goats passing in the other direction.  They were heading home from their day in the mountains.  So cool! 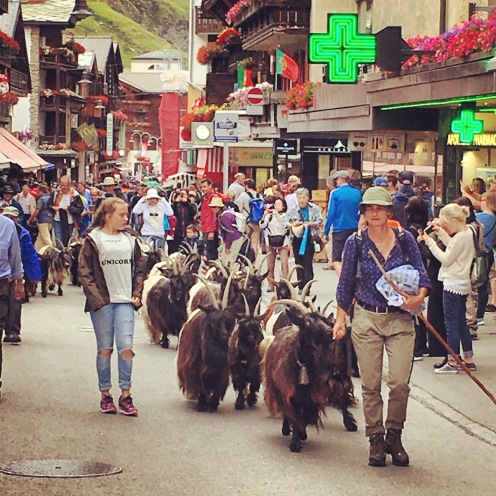 Since the weather wasn’t improving much, we spent the rest of the afternoon at the hotel pool much to the boys’ delight.  We were also excited to find a complimentary bottle of Prosecco waiting for us in our room when we returned.  So nice!

The next morning we were bummed to wake up to total fog with not even a glimpse of the mountains.  We were at least able to enjoy a long, leisurely, and delicious breakfast before deciding to hope for the best and head up the Sunnegga funicular.  Rick Steves recommends this as the cheapest way to get a great view of the Matterhorn, but unfortunately when we got to the top it was nothing but fog!

Luckily, there was a nice playground where we hung out for about an hour and then we went to the nearby restaurant for coffees and hot chocolates to warm up.  We sat around willing the clouds to lift so we could catch a glimpse of the Matterhorn and finally they did just a bit.  We went for a short hike around and we were able to see some beautiful views of the mountains and glaciers surrounding us.

It’s juuuust behind those clouds!

We knew blowing those clouds away would help! 😉

After our mountain exploring, we went back down the funicular and walked around the old part of Zermatt.  We enjoyed a taco lunch at Gees Bar and then we tried to go for a hike down from the cable car station of Furi, but it started to rain so after a quick walk around, we headed back down.  Back to the hotel to swim and rest and then later a pizza dinner to end the day.

Almost clear heading up to Furi, but then the rain came!

On Monday we woke up to another cloudy day, but we weren’t going to let it stop us because it was Swiss National Day!

The forecast called for the skies to get a bit clearer towards mid-day and through the afternoon so we took our chances and headed up to the top of the mountains on the Gornergrat train. 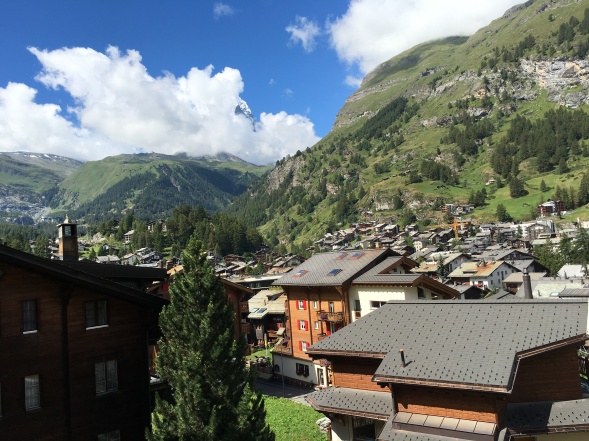 Getting sunny, but the Matterhorn is hiding again! 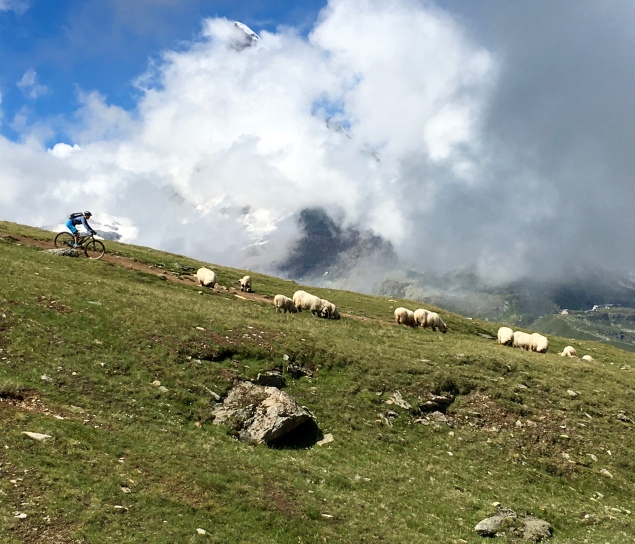 On our way up Jonah was excited to spot the cute, fluffy black-faced sheep that we had been on the lookout for all weekend.  The owners of our hotel have a large flock but since the sheep wander they never know exactly where they’re at.  Turns out they were up pretty high enjoying the views.  The hotel does lead a hike up to visit the flock on Wednesdays- too bad we weren’t staying until then!

When we got up to the top we couldn’t see the Matterhorn at all and maybe because of the weather or the holiday, the famous St. Bernard dogs weren’t there either.  But the views in the opposite direction made it all worthwhile!  Mountains, glaciers, and even a glacial lake.  Just incredible. 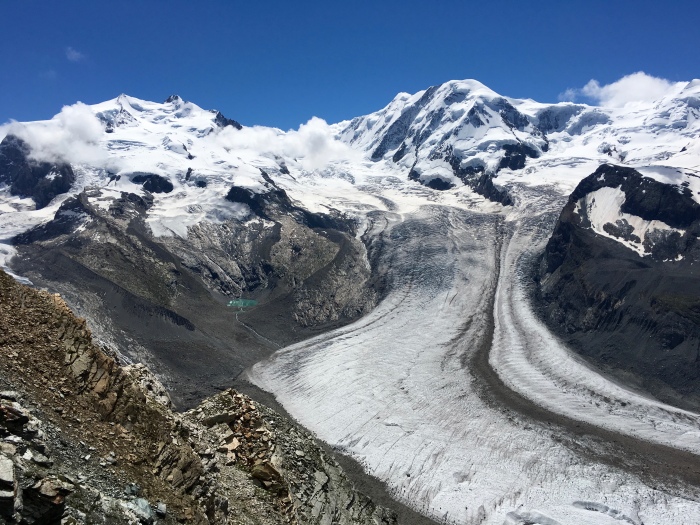 As we started the hike from the top down to Rifelsee, the skies cleared some and we were even able to see a bit of the Matterhorn.  The hike felt otherworldly at times and Jonah did a great job making the trek down. 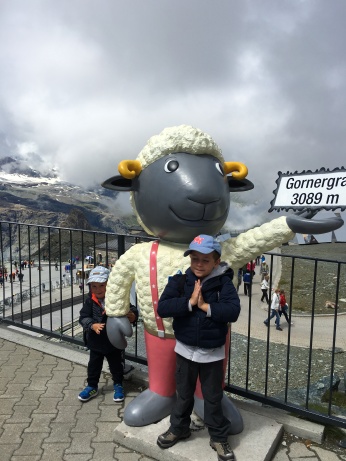 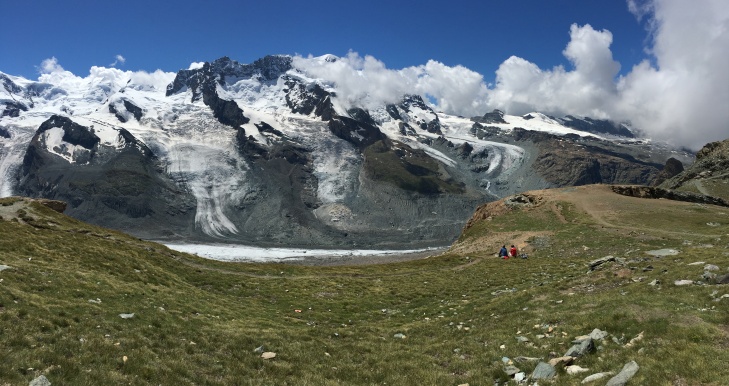 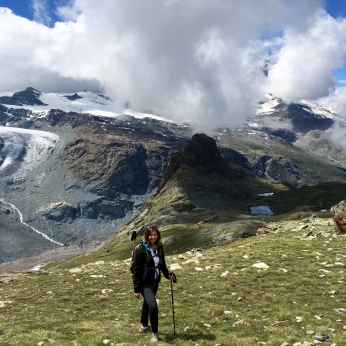 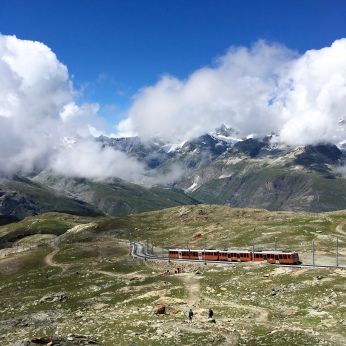 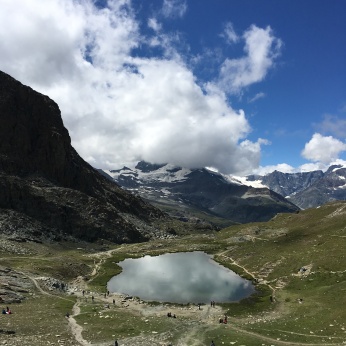 The clouds didn’t clear by the time we got to Rifelsee, but we could at least make out the mountain behind it.  Such an incredible place.

We took the longer way down to Riffelberg for some more stunning views and then caught the train back down into Zermatt.  I can’t think of a better way to celebrate Switzerland than to spend a day hiking in this incredible example of Switzerland at its finest. 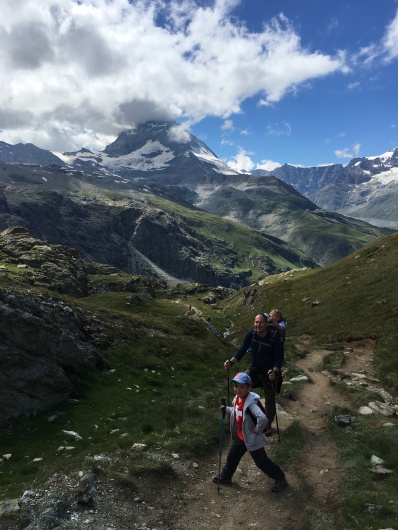 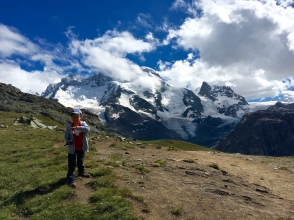 It was such a fun day and that night we had big plans to hit the street festival and watch the fireworks for Swiss National Day.  The main street was packed, but it was lots of fun and a very festive atmosphere.  Tons of food, drinks, and music-it was a great place to spend a couple of hours before the fireworks. 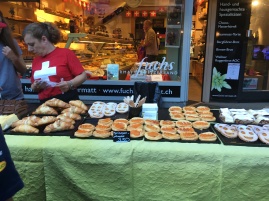 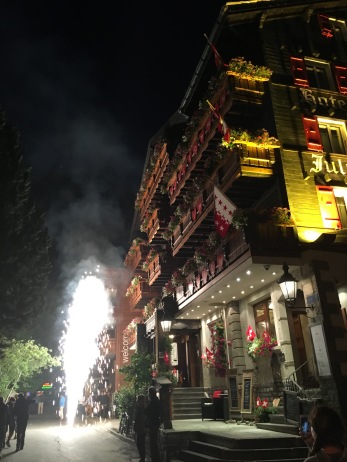 By the time it got dark, it was really chilly and the boys were getting tired so we made the executive decision to watch the fireworks from the balcony of our hotel room.  It was an excellent decision because the view was amazing, we stayed snuggly warm under the blankets, and Mason asked to go to bed right before the grand finale.  But it was so special watching the boys see their first fireworks show in such a special place.  Memories that will last a lifetime, for sure! 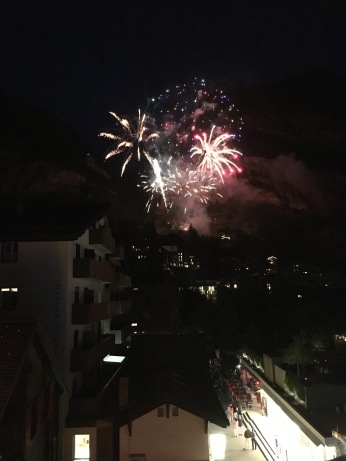 The next morning we had one last hearty Swiss breakfast and the Matterhorn came out in all her glory so we were able to get one last breathtaking view. 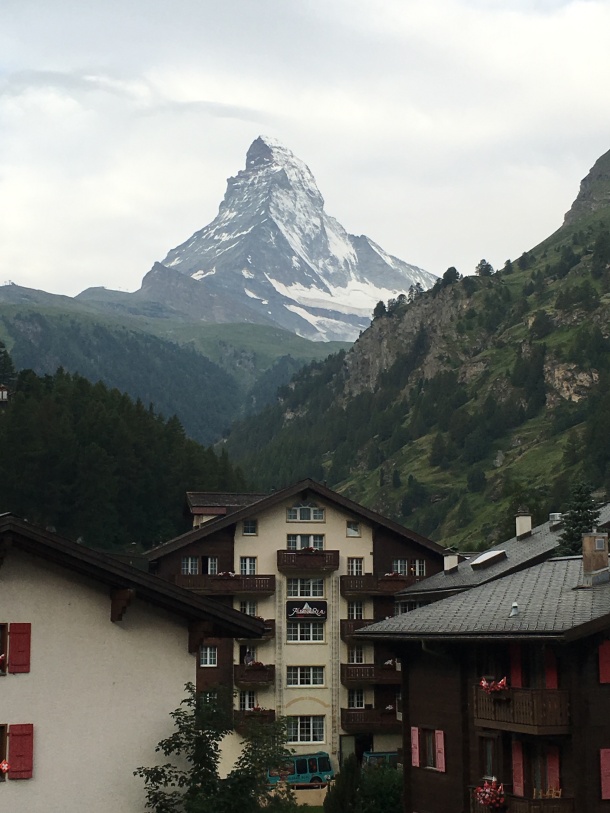 Also on a side note, my husband has been eating Toblerone all his life but only just realized the Matterhorn is the mountain pictured on this famous chocolate.  I think it was all the Asian tourists taking this photo that finally made it click… 😉

Aha!  Live and learn.  🙂  Well, chocolate or not, we fell hard for the Matterhorn and hope to be lucky enough to return again someday!